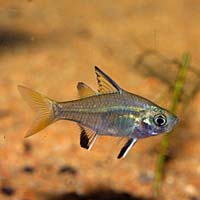 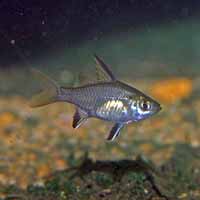 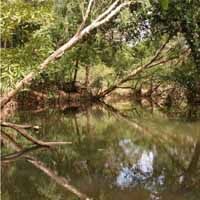 General information: This species is not yet described. The specimens cultivated at Aquagreen were bred from stock collected out of the Finnis River near Batchelor in the NT. It is very similar to the Sailfin Glassfish. They are a schooling species common throughout its range. Best kept as a school in a medium to large aquarium. They will school midwater and look quite attractive as a group. When the fish are at ease with their surroundings they will display much more colour. They grow to about 50mm in length. The sexes are difficult to tell apart however males may be a little more colourful with slightly longer fins.

Cultivation notes : They are small predators eating small crustaceans such as daphnia, Moina, cyclops and small aquatic insects. In captivity they may take flake food but are better fed a prepared frozen food mix, frozen bloodworms and other meaty diet items. If you have access to live foods thena feed of live fooods twice a week will keep them in good condition. The water quality average for all the places they have been collected as per the ANGFA database is - Temperature 19 to 29 deg C. pH from 6.7 to 8.9. Places collected had slow to no water flow and clear, low turbidity. Water hardness average about 102ppm and carbonate hardness average about 102ppm. The breeding of this species is carried out in large aquaculture ponds. There is no account of them breeding in an aquarium although it should be possible.

Distribution : Throgh the central areas of Australia in the Finke and Bulloo Rivers from the Gulf of Carpentaria across to the Kimberley region of WA.

Selling details : Sold as individual fish at 2.5 cm. They are difficult to sex.