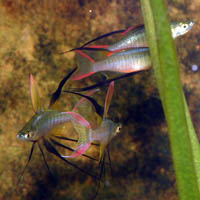 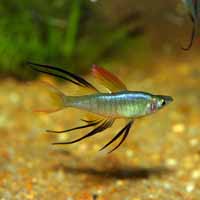 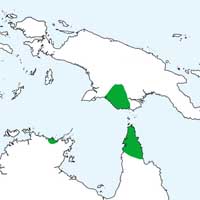 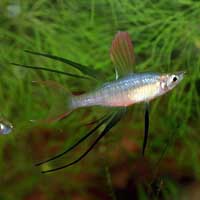 General information: The threadfin rainbowfish is a small unusual fish with a long thin body and a very small mouth. The males are easily recognised by long feathery fins when mature and grow to an approximate total length of 6 cm. Females are smaller and grow to approximately 4cm total length. The Gulbuwangay River form has nice colouration, black fins with some yellow at the base of the second dorsal fin and anal fin with the first dorsal fin black containing a reasonable proportion of red. The body is silvery brown sometimes with several darker vertical bands. Broosdstock were collected in a billabong adjacent the village of Mirrngatja. The threadfin rainbowfish were close to this vegetation and seen in schools, some of which were quite long, to three meters containing many fish. The water quality from the collection site was measured each time the area was visited. Collections were made during the dry season. The dry season coincides with southern winter. Daytime temperatures are similar to the wet season but the humidity levels are lower and night time temperatures are about ten deg C lower. The water was quite warm at 30 deg C. The pH average was 6.1. These measurements would be quite different in the wet season but not what you might expect. Temperature of the water may be lower, the pH higher and hardness/alkalinity levels lower. The natural diet of this fish is not known but it is believed to be mainly a carnivore eating small crustaceans and aquatic insects. It has not been observed eating algae or other plant material like other rainbows. No spawning behaviour had been observed in wild fish during the collections. The use of this small fish as an aquaculture species has been done with an arrangement between Aquagreen and Traditional Owner of the area. It is a project that falls under the banner of Sustainable use of a natural resource as a conservation tool, where some monies from the sale of cultured specimens is returned to the land owners to assist with land management practises.

Cultivation notes : The adults are a schooling species so aquarium size is best 60cm or larger to house as many as possible but it is recommended a minimum of six. A magnificent set up for these fish is a large school of 80 to a 100 in a well planted 183cm x 61cm x 61cm (6 x 2 x 2 feet) aquarium. The aquarium is best set up with plenty of open swimming area and a tall background plants to the surface and either very short groundcover plant or plain gravel. The water these fish are produced at Aquagreen is usually about 27 to 30 deg C, pH about 6.5 to 7.0, carbonate hardness approx 60ppm, hardness approx 50ppm. These fish are cultured in ponds using natural plankton supplemented with commercial foods. They will take small portions of prepared foods but are best fed with live foods at least twice a week, more if possible. These fish will spawn readily in the aquarium, they are egg scatters and have small eggs that stick to the aquatic vegetation. They take several days to hatch and are quite small, they can be raised with commercial fry starter foods and plankton culture. These are a small delicate species that does not fare well with too much competition. They are best kept with smaller peaceful species such as blue-eyes.

Distribution : Recorded from several places in North Queensland, Central Arnhem Land in the Northern Territory and in Southern New Guinea.