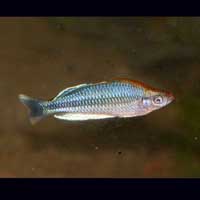 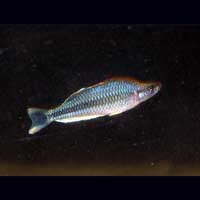 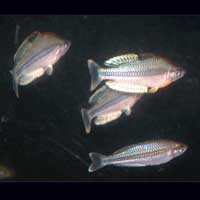 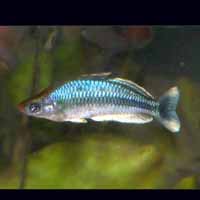 General information: This is a smaller member of the rainbowfish family growing to about 4 cm average with specimens up to 5.5 cm. The males have very nice colours, a metalic blue with a red/brown head and whitish fins. The females are similar but with smaller fins and without the red brown head. The natural diet of this species is unknown but is thought to be the same as other smaller rainbows, small insects both aquatic and terrestrial, algae, small crustaceans. No information about the natural location water quality is available but generally the kimberley Escarpment is sandstone and the water running off the silicon based rocks pick up very little mineral and is quite soft and slighly acidic. They live in rocky country and where originally observed were in a large pool formed up into schools.

Cultivation notes : Best kept in an aquarium about 90cm or bigger with plants and an open area with a bit of current. Temperature about 27, hardness around 50 to 100, alkalinity 50 to 100, not too fussy about water quality like most rainbowfish as long it is clean and well maintained. captive diet for rainbow fish can be as for any small omnivire but with a leaning toward greens. If fed a high protein diet most rainbowfish will become very fat and not display their best colours.

Distribution : This rainbowfish has a small distribution in a couple of streams that run into the Prince Regent River, WA.