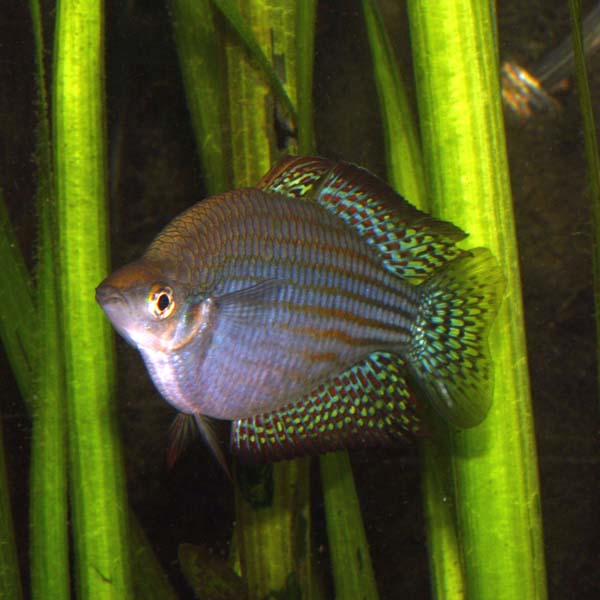 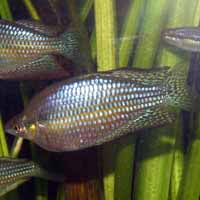 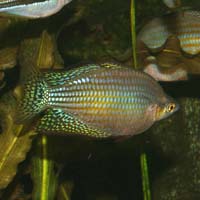 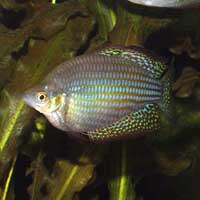 General information: Remu is the Yolngu word for this chequered rainbowfish found in and collected from Gulbuwangay a small creek that runs into the Arafura Swamp near Mirrngatja. Mirrngatja is a small village on the South Eastern corner of the vast wetland that is approximately 50 km long and 30km wide. The owner of the area is a very traditional Aboriginal person, Mangay of the Guyula Clan, he and his family live off his country and wants the lands to remain pristine. He has no need for most modern conveniences but does have a few improvements to help him manage the large area under his care. A percentage of the farm gate sales of this fish will go to Mangay and his community to help care for his country.

Cultivation notes : Chequered Rainbowfish is a little more tolerant of lower dissolved oxygen levels in thickly planted billabongs than some other rainbowfishes, especially banded rainbowfish. It likes to be in a planted aqiarium but prefers a little current and an open swimming area. The water quality where the fish was collected during the month of August, late dry season was temperature 27.1 degrees celcius, pH 7.25, dissolved oxygen 8.10 mg/l, conductivity 50 microsiemens, carbonate hardness 10 ppm, general hardness 10 ppm, turbidity 21 NTU. The water they are cultured in is between 26 and 32 deg, hardness 50ppm, alkalinity 60ppm, pH about 7. Diet in the wild would be ants algae other aquatic and terrestrial insects and micro crustaceans. A captive diet should contain between 30 and 50 % vegetable matter. This rainbowfish is probably one of the most vegetarian of all the rainbowfishes and if it is not given some vegetable matter may start on your plants.

Distribution : The chequered rainbowfish is found across the top of the Northern Territory and Cape York, Qld.

Selling details : Sold as individuals at 4 cm or larger.