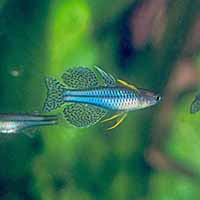 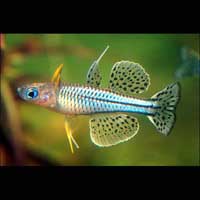 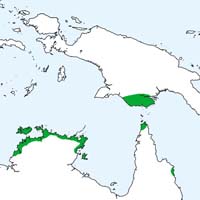 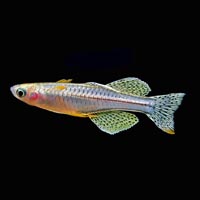 General information: Natural habitat - the brood stock for this cultured species was obtained from a collection from a small billabong about one kilometre east of the Cadell River, Central Arnhem Land. A percentage of the farm gate sales are returned to the traditional owner of the area to help with land management. Water quality in the billabong where the brood stock was collected was checked but all times when collections occurred were in the dry season so temperatures and the measurements will not be a true average. Temperature approx 27 deg C, hardness 64ppm average (3.5deg), carbonate hardness 55ppm (3 deg), pH 6.7 average. Size - they are reported to grow to 4 cm. Diet - the natural diet is unknown but generally believed that the blue-eyes eat small crustaceans and insects. The photos are from left to right, 1. a wild male photo by Dave Wilson. 2. A young captive bred male, photo by Gunther Schmida. 3. Approximate distribution, map drawn by Dave Wilson. 4. A male with yellow bottom lobe on caudal fin, photo by Dave Wilson.

Cultivation notes : Aquarium set up - a small aquarium about 30cm is OK, well planted with darker gravel will bring out the best colour. Place the aquarium where it will receive some morning sunlight and you will be rewarded with a magnificent display when the fishes are illuminated by natural light. Water quality at the place where they are cultured is generally temp 27 deg C, pH 7.0, hardness 50ppm, alkalinity or carbonate hardness about 60ppm. Captive diet - can be fed most prepared foods but will not thrive on dry flake foods, it needs a portion of live foods once or twice a week such as daphnia or mosquito wrigglers. Size - grows to 4.0 cm in captivity. Breeding occurs most days where females are attracted to a suitable spawning site by displaying males where they lay two or three eggs which take about 10 days to hatch. the fry can be raised on commercial fry starters and are quite large so accept new hatched brine shrimp within a few days of hatching.

Distribution : The map shows the approximate locations in Qld, NT and New Guinea.

Selling details : Sold as individuals at or over 2 cm total length.

Reference: Allen (1995)"Rainbowfishes, In Nature and the Aquarium". Allen, Midgley and Allen (2002) "Field Guide to the Freshwater fishes of Australia". ANGFA database available at URL http://db.angfa.org.au